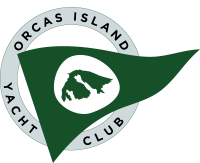 The OIYC has a very active racing schedule. Club racing in 2020 will kick off on Fridays in April (except 4/17) with rabbit starts at 6PM (race committee optional). Races will be scored, but not counted for Sailor of the Year. Normal club racing begins on Wednesdays in May through August and Sundays in September. New for 2020 will also be one medium distance race on one Friday each month May to September. Please see the club calendar, which includes all race dates (or connect to Google Calendar).

Club racing is done on West Sound with races starting at 6PM in the summer and 2PM in September. With its protected waters, which are out of the main flow of heavy currents and a good chance of usable wind even during the summer months, West Sound is a fun place to sail and still gives a little advantage to the old-timers who know its shifty ways.

The early races of the season can be lightly attended, but by July and August more than 15 sailboats are often seen out racing. After the racing is over, a good time can be found at the OIYC picnic shelter, where racers gather to grill their dinner, drink their beer and talk about the rules of racing, which clearly the other skippers don't have a clue about.

OIYC is also host to several races and regattas, including the Shaw Island Winter Classic in February, the East Sound Spring Regatta in April, Round Orcas in June, Benson Cup in October, and the big finale of the season, the Round the County Race.